Tongues.org’s purpose is to allow people of different languages to share and learn eachother’s language and culture.  We believe that the core of a culture is best transmitted through its literature and language.  If you can understand a language well enough to read a nation’s best loved classics, then you will begin to know the hidden thoughts and workings of the people; something that is not revealed in its glossy self-representation and tourism.  You will not just know German, Ancient Greek, or Spanish; you will actually gain a little of the precision of a German, the relaxation of a Spaniard, the thoughtfulness of an ancient Greek.

To see how the actual learning works, the best way is to just pick a course and try it.  The rest of this page is useful for people who want to contribute sources and translations. 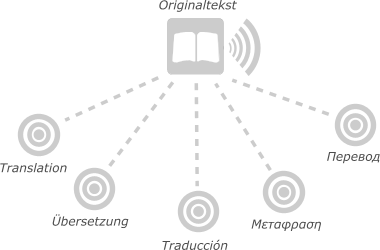 Here is a diagram representing an example scenario in which a Norwegian source text with audio is translated into many other languages, allowing, in this case, speakers of English, German, Spanish, Greek, and Russian to learn Norwegian.

Tongues.org extensively uses “parallel” texts, which means that the foreign text is on one side and the native on the other.  “Parallel”, however, is not particularly accurate, because the texts are usually extremely lopsided.  The source text is, generally, authentic literature from a country, while the translation is just a strict retelling whose only purpose is to teach the meaning of the words in the source text.

Sources and translations are separated, so if someone makes the source text for Don Quixote, with audio, other people can create translations in other language, like, English, German, Russian, Arabic, etc.

For an example source text we shall use Grimm’s Fairy Tales.  Originally published in German by the brother’s Grimm, these beloved fairy tales have been translated into many other languages.  Because their origin is German, these make a good German source text.  After learning a few of the Grimm’s fairy tales, you will see and agree that they are distinctly German in nature, and that the language particularly fits the stories.

We would not want to use Grimm’s Fairy tales as an English source text because it lacks the beauty of the original and would perhaps mislead the learner about English culture.  Rather, for English, we’d want to use something like Winnie the Pooh (with permission) or the stories of Beatrix Potter.

For every source text there is corresponding audio, read, ideally, by a native speaker.  For Beatrix Potter, best would be a reader with a thick English accent; for Gimm’s fairy tales, we have a variety of readers from north and south Germany, reading fast or slow.

It’s best to use language content originating from the culture of that language, which could even include news broadcasts, speeches, and scenes from movies.  However, if there’s nothing authentic out there for a particular language, it’s ok to use something from a textbook or from the Bible, or whatever else you can find, as long as it is well-written.

The purpose of a translation is to help the learner understand the meaning of the individual foreign words or phrases, not to create a beautiful version of the same story in a different language.  Translations on tongues.org should usually be clunky and ugly reading, compared to the original.  They should match the wording and word-order of the source text as closely as possible without losing the meaning or intent of the original.

Beginner texts, especially, should have literal translations.  For more difficult literature, it is safer to assume that the learner already has a knowledge of basic wording and phrasing, so it is allowable or beneficial for translations of such sources to depart further from the actual literal meaning.

Here’s how to actually import a source text or a translation into tongues.org.

You need to divide the text of the source into sentences or phrases.  Generally this will be at the end of a sentence, or, if the sentence is very long, at some mediate punctuation.  You must complete a few lessons on tongues.org before you are allowed to create a new text, which requirement’s fulfillment will give you an idea for how long you should make the sentences.

Put each division on its own line.  Also, clean the text of anything you don’t want to force the learner to type, which might mean deleting some numbers or quotes.  You can also wrap words in HTML tags in order to color, italicize, or embolden them.

You also need audio to go along with the text, in mp3 format.  If you haven’t found audio for your text from some other source, and you are a speaker of that language, you can record yourself reading it using a microphone and a free recording program like Audacity.

In the Control Panel, use the Create New Course box to create your course.  Then click on the course and add a new lesson.  Upload your mp3 file and paste your text into the Content box.  Then click on the Live Editor button, click on the book icon, and you’ll be able to line up the audio with the text, sentence by sentence.

Translations are easier to make because you don’t need audio and you don’t have to figure out where to divide the sentences of the original text.  Find the id of the source you want to translate, which you can do by looking at the URL of the course in the course browser, or by inquiring on the Forums.  Enter the id into the “Make a New Translation” box in the Control Panel, then click on the new translation.

Click on the lesson you want to translate.  You can either enter a block of text that lines up with the source text on each line, or you can click the “Live Editor” button, click the book icon, then click the little pencil at the bottom to enter in the translation for each sentence.

2 Responses to “How to Teach”